Call Us Email Us Open House

Rob Bennett for The Wall Street Journal
A Moishe’s employee in a climate-controlled managed storage area for collectors’ artworks inside Mana Contemporary in Jersey City.

Behind the heavy metal doors at an old tobacco factory on Newark Avenue in Jersey City, portraits by the artist Chuck Close—of Hillary Clinton, of the composer Philip Glass—hang on pristine white walls.

Inside the warehouse is a honeycomb of art activity in a space designed with the cool aesthetic of a Chelsea gallery: storage, framing, restoration, galleries, supply stores. The facility holds dozens of artists’ studios and there are plans for a restaurant, dance space and recording studios.

The arts complex is the newest off shoot of Moishe’s Moving and Storage. Eugene Lemay, the moving company’s president and chief executive, acknowledges that it isn’t an obvious match.

“Movers don’t understand anything about art,” he said. “Everything is an item for them. For example, if you have a piece of art and they see it’s a chalkboard like—what’s his name?—Sol Lewitt, they’ll erase it to try to clean it up to do the client a favor.”

The city is home to a number of companies that move priceless objects between studios, galleries and collectors’ homes. But for Lemay, developing a full-service arts center is a way to avoid becoming just “another moving company that specializes in art.” 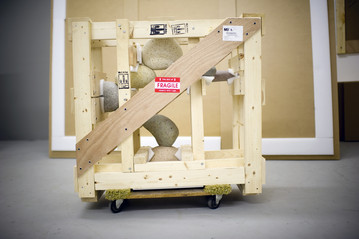 It’s also a way to grab new business. Create a home for working artists and a place where collectors can attend lectures, gallery openings and studio visits, and perhaps those collectors will become patrons for Moishe’s art-storage and management services as well.

“You can’t get to collectors. They hide,” Lemay said. “You can’t knock on someone’s door and say, ‘Hello, I know you’re a collector, can I store your art?’ So how do you get them? One way was we create artists’ studios here. We had artists bring their collectors. Let them see what they do here.”

Mana Contemporary, named after Moishe’s founder, is already Jersey City’s largest arts center. It is now accessible to visitors by appointment only, and will officially open in March. Lemay said it has already cost between $4 million and $6 million to fully transform the 500,000-square-foot space.

Lemay isn’t doing it alone. Yigal Ozeri, a voluble Israeli painter with a penchant for cowboy boots, has worked with him to bring artists and organize events in the space. Mr. Ozeri’s exuberance matches Mr. Lemay’s composed, business-like bearing.

“I brought all my connections, all the people I know, and I put them together,” Ozeri said. “It’s like a whole city in one building.”

In its first phase, Mana Contemporary has filled 23 studios with established artists who already have gallery representation. The average studio is about 2,000 square feet, for which artists pay a $2-per-square-foot monthly rent.

Doug Argue, a painter, is currently preparing for an upcoming show in his large, light-filled studio. He found Mana through a friend of a photographer who also uses the space.

“Spaces like this don’t exist in Queens or Brooklyn,” Argue said.

Lemay said the second phase will introduce emerging artists into the mix. Studio rents for these younger artists will be $1 per square foot. “Young artists, no one talks to them,” he said.

A photographer and video artist himself, Lemay uses one of the studios for his own large-scale installations. He is an Israeli who was born to an Arab-Catholic family in Detroit. His parents converted to Judaism in 1969 and moved to the entire family—Lemay has 13 brothers and sisters—to Israel.

When Lemay returned to the U.S. in 1983, he started working with a young Israeli mover named Moishe Mana. As he rose in the company, Lemay led Moishe’s expansion beyond household and office moving and storage and into niches like documents and wines.

Lemay said some of Moishe’s moving techniques, including bar codes to track inventory, are in use at the Mana Center. He developed special nylon packaging to protect sensitive materials in the new facility.

The art-storage side of the operation currently serves some 600 collectors who keep paintings, sculptures and even fashion collections at the site (Calvin Klein and Norma Kamali are clients). Mana puts some items from these stored collections on display.

Art collector Eileen Kaminsky, who keeps her collection at Mana Contemporary, presents and sponsors shows in a gallery on the building’s sixth floor.

The gallery’s first show featured works from the Louis P. and Susan K. Meisel Collection. Mr. Meisel coined the term photorealism in the 1960s; his holdings include the works by Chuck Close hanging in the warehouse entry.

Time will tell if Mana Contemporary’s all-in-one approach, mixing artists, their patrons and the public will succeed in luring collectors to the facility’s storage and management services.

Zoë Dictrow, who with her husband Joel has been collecting art for 30 years, said the idea of a hub for artists didn’t make her more likely to want to store works in the space.

“We live in the biggest art hub in the world, New York City,” Dictrow said. All she’s after is “a clean, safe space for art.